When Rob star Rob Schneider was a regular on Saturday Night Live he stood out from the rest of the cast because he was actually funny! He moved on to star or co-star in some funny films such as Duece Bigalow: Male Gigolo, Grown Ups, and The Hot Chick yet didn't quite hit his stride until now with his own TV sitcom. Rob is newly married to the young and beautiful Maggie (Claudia Bassols of Blackout, Emulsion) who is Hispanic and has a large and extremely close family in southern California. Her parents Fernando (Cheech Marin from Up In Smoke, Next Movie) and Rosa (Diana-Marie Riva from Castle, Everybody Loves Raymond) are upset because their daughter eloped to Vegas with Rob. Meanwhile Rob has problems of his own simply because his new bride is now living in his home. He has issues with his personal "stuff" due to having OCD and had been a bachelor until recently. The show has its moments but mostly insults Mexicans every chance it gets. 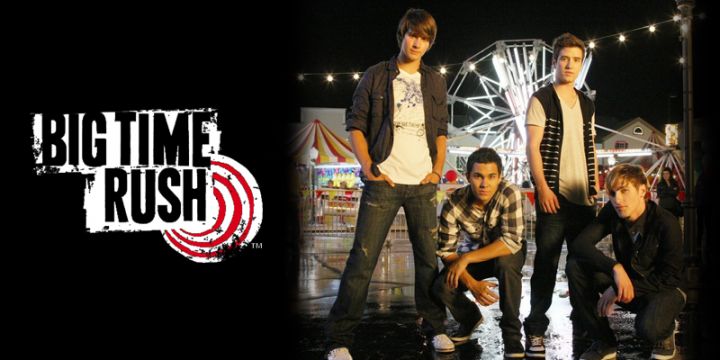 2021
Comedy & Humor
The newest "boy band" to hit the pop music scene is called Big Time Rush and the boys are ready for their chance at fame and fortune. Starring Kendall Schmidt as Kendall Knight, Carlos Pena, Jr. as Carlos Garcia, James Maslow as James Diamond, and Logan Henderson plays Logan Mitchell allows the actors to keep their own first names and a grip on reality. They must move away from the laid back lifestyle they've grown up with in Minnesota and go to the big city, LA. The four boys head to the Palmdale Hotel in Los Angeles, California and enroll in a special actors and performer's only school, the Palmwoods. Boys will be boys and their antics certainly get the attention of their elders including their producer, a hard driving and outrageous man by the name of Gustavo Rocque (played by Stephen Kramer Glickman). A TV series about brotherhood and friendship, Big Time Rush or BTR has a strong following and some great music. Once the season's filming is complete the band goes on a tour to "strut their stuff" before live audiences.

2021
Comedy & Humor
A roast is defined as a public means of giving out insults, tributes, or even telling outlandish stories (be they true or outright lies) while keeping it fun and entertaining for all. There is a roast-master and the "roastee" is often a celebrity of some sort, and participants include friends, co-workers, fans, and family, many of whom also participate in putting the "roastee" on the hot seat. Among the "roastees" are Pamela Anderson, Denis Leary, William Shatner, David Hasselhoff, Donald Trump, Joan Rivers, and Charlie Sheen. Each of the participants have to have a thick skin and a broad sense of humor because some of the comments bestowed on them can be rather colorful and even downright mean spirited, yet all meant to be in fun. The 90 minute programs may have certain requests that some topics be left out of the final airing including William Shatner's request that the fact his late wife drown in their pool as well as Pamela Anderson asking that her bout with Hepatitis C be kept from the show. Charlie Sheen also requested jokes referencing his mother not be aired. Others have made no such requests, leaving themselves wide open for a happy roasting!

2021
Comedy & Humor
As he championed "the new journalism" in the late sixties, Tom Wolfe suggested no one ever would write anything truly compelling"”fact or fiction"”about the suburbs; he asserted, "There is no life there." During the New Depression, however, the suburbs have gone ghetto, suddenly teeming with life and depravity; and television writers are producing all kinds of compelling stuff about what they have discovered beyond the white picket fences. Witness Showtime's smash-hit "Weeds," the life and times of a "proper" suburban widow keeping-up appearances while she deals more dope than a six-pack of Mexican cartels. As in "The Office," the basic premise for "Weeds" is an import from Great Britain, adapted from the British film Saving Grace which showed a widow and her gardener conspiring to maintain the widow's lifestyle by supplying the locals with their favorite herbal refreshment. Critics frequently compare "Weeds" with American Beauty for its exploitation of the idea "Normal is the face we wear to cover how f***ed-up we are." By contrast with "Desperate Housewives," Nancy Botwin, our entrepreneurial heroine, has far more good reason for desperation than her difficulty achieving orgasm; she has a house, a mortgage, two sons, and a reputation. Since Bonfire of the Vanities tanked and "Weeds" flourished, Tom Wolfe may have to consider the distinct possibility that there is no life in Manhattan.

2010
Comedy & Humor
Terriers TV Show, a detective comedy, tells the story about an ex-cop Hank Dolworth, (Donal Logue) and how he deals with divorce, getting fired and getting sober. Hank pairs up with his best friend Britt Pollack (Michael Raymond James), a reformed small time crook to form an unlicensed Private Investigation Agency in San Diego. Together they set out hoping to solve crimes while trying to stay as far from danger as possible while assuming little to no responsibility. Terriers show you how one man's pursuit to a fresh start can be more difficult than planned. So follow this unlikely duo and learn why it is no surprise that they feel they resemble terriers...

2021
Comedy & Humor
NBC's Last Call with Carson Daly features musical performers, interviews with well known celebrities, plus some topical documentary style programming, all within a half hour format. It has been delegated to super late night (actually early early morning viewing) and follows after a strong lineup which includes The Tonight Show with Jay Leno and Late Night with Jimmy Fallon. This is Daly's 11th season of late night entertainment and some recent guests include Make Believe The Black Angels, Adam Blackstone, Adam Pally, and Ben Schwartz. While Leno and O'Brien have switched their time slots Carson Daly has been solidly in place and earning even more ratings points thanks to discourse between other late night hosts. The documentary segments take Daly out of the studio and on the road to places like Tom Green's home in the Hollywood Hills or on a motorcycle road trip along historic Route 66. Musically and documentary style is a visit to the famous Whiskey Bar and visit with Kings of Leon (Grammy award winning band).

2021
Comedy & Humor
Enlightened brings the very talented Laura Dern to television as Amy Jellicoe, an executive who has found her job and her life to be too much to bear. When she suffers from a breakdown which just happens to be a very public embarrassing situation for her, she finds she must attempt to put her life back together by going through rehabilitation. Watch for Diane Ladd who plays Amy's mother, Helen Jellicoe (she is Dern's real life mother). Amy spends three months in Hawaii where she undergoes therapy to help with her problems, then returns home to face reality and the group of co-workers she embarrassed herself by breaking down in front of, living with her mother who is never short on unwelcome advice, and a lazy ex-husband (Luke Wilson) who enjoys his "recreational" drugs too much. Laura Dern is known for her roles in Jurassic Park, Rambling Rose, & Wild At Heart. Actress Diane Ladd has starred in Alice Doesn't Live Here Anymore, Primary Colors, & Wild At Heart. She and actor Bruce Dern are Laura's parents. Luke Wilson has been seen in 3:10 To Yuma, Blades of Glory, & Death at a Funeral; and he is brother of Owen Wilson.