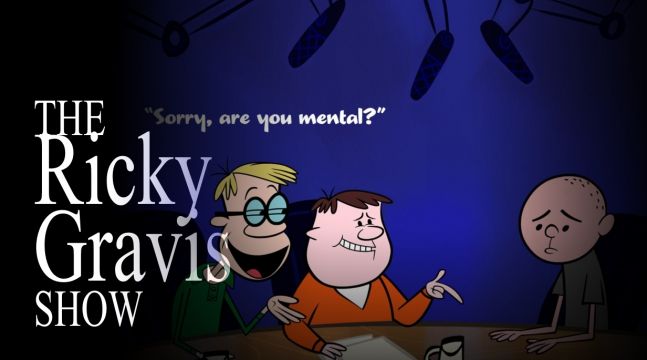 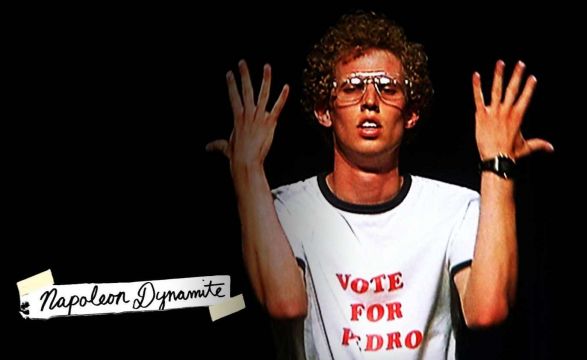 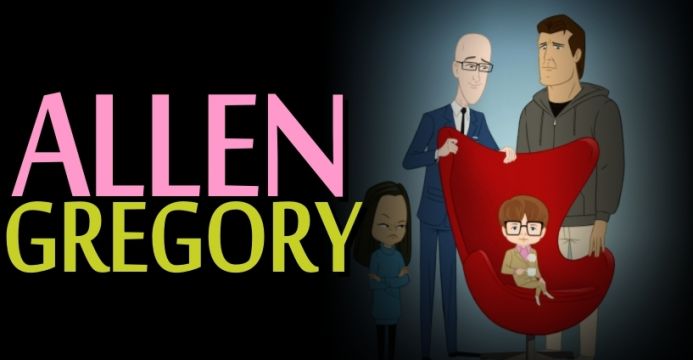 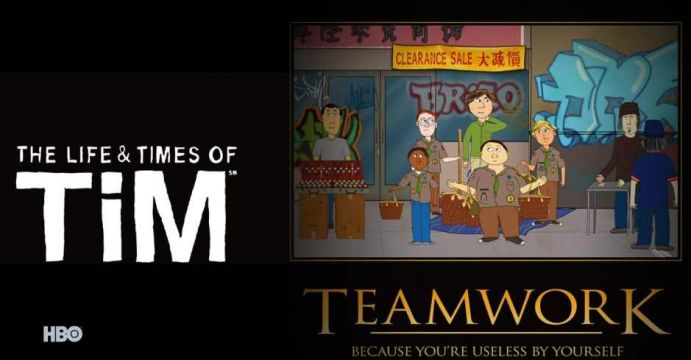 The Life & Times of Tim

This is another animated comedy sit com on MTV and one that's really funny! A bunch of kids go through some fun situations each week and the voices of most characters are so familiar! Mondo Brando is a transplanted New Jersey guy who comes to Playa Del Toro in sunny Southern California with his mother who is a single outspoken woman who's ready to soak up a bit of that sun on the beach. Mondo learns to become part of the scene as he attends school and gets friendly with the locals. Mondo becomes friends with Woodie, a home boy who knows the ways of Playa Del Toro and shows Mondo around, introducing him to the off the wall characters that go to their school and play on the beach. Mondo Brando (voiced by Josh Gad from Love and Other Drugs, Bored to Death), his mom Babs is voiced by Debi Mazar (Entourage, Jonas), Woodie's voice is done by Adam Brody (Cop Out, The O.C.). And some of the odd ball characters include Turk, voiced by Jake Busey (Sons of Tucson, The Mentalist), and Wadska who is voiced by Tony Hale (Human Target, Justified).

If you like television that deals with fads from the movies, television, toys, and especially pop culture you might love Robot Chicken. It is full of comedy sketches and parodies that include using animated toys, claymation, and pose-able action figures. It blatantly steals from such film icons as Star Wars. Parodies TV stars like Bob Saget and his America's Funniest Home Videos, and even Public Service Announcements for prostate cancer provided by Optimus Prime, a Transformer character. How do you not laugh at all this madness and mayhem? Voice roles on Robot Chicken are obviously in high demand because there is a long list of celebrity guests who have provided their voiceovers for various characters on the show over the years of its run. Listen for Wayne Brady, Dean Cain, Dr. Drew, Phyllis Diller, Nick & Gene Simmons, Conan O'Brien, Carrie Fisher, Mark Hamill, Robert Culp, Billy Dee Williams, "Weird Al" Yankovic, and Burt Reynolds among many others who have become part of the weirdness of this extremely popular television show. Robot Chicken is a mad romp filled with funny skits and top quality comedy writing! 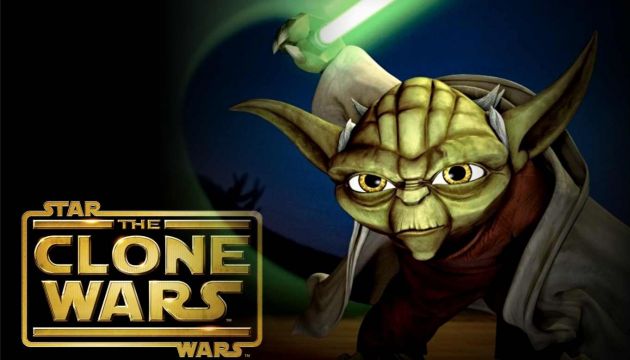 As an animated TV series that's set somewhere in the Star Wars Galaxy, The Clone Wars joins up with other select stories that revolve around that galaxy as part of a multimedia project that presents all of the Star Wars story ideas and gives many of them a separate identity. Among the various conflicts that develop between the Confederacy of Independent Systems and the Galactic Republic, are Sith apprentice related. Like the Darth Sidious also known as Supreme Chancellor Palpatine and Jedi Knight Anakin Skywalker. Produced in HDT or high definition television, each episode of Star Wars: The Clone Wars runs 22 minutes and is entertaining programming for all ages. With focus specifically on Obi-Wan Kenobi as well as Anakin Skywalker and also Ahsoka Tano, thes time around the story line delves into other characters from the original story. The Star Wars theme runs particularly well as an animated series and fits the small screen nearly as well as the big screens seen in theaters around the world. The Star Wars: Decoded is actually season one of The Clone Wars but with added trivia and info related to each episode.

Batman The Brave and the Bold

Batman: The Brave and the Bold, featuring two or more of the super heroes who decide to come together and foil super villains and solve crimes, plays out on television weekly in this animated American series. When Batman teams up with other super heroes life will be safer here on planet Earth. Each show begins with an introduction and the villain and super hero may be introduced for that specific episode. Each episode is split into two parts with an adventure before the theme song is played followed by the main adventure or plot. In this version of the Dark Knight we see a more playful and light hearted hero with occasional reference to the 1960's version of the Batman series thrown in just for fun. Some of the super heroes and villains appearing on episodes of Batman: The Brave and the Bold include Green Lantern, Equinox, Vulture, Elasti-Girl, Wildcat, Riddler, Space Ghost, Crazy Quilt, and the Flash. Vicki Vale makes an occasional appearance as Bruce Wayne's love interest. A light tone for the younger set is common in this series but the subject of death is covered somewhat when the murders of Bruce Wayne's parents, Thomas and Martha Wayne by the evil Joe Chill are retold.

Wonderfully illustrated and written by Noriaki Kubo, Bleach is a tale that follows Ichigo Kurosaki in a series of adventurous travels once he has gotten the powers of a "Death God" that is similar to the Grim Reaper. With his new powers Kurosaki now defends humans against evil spirits while guiding their souls to their afterlife. This immensely popular television series is an anthology format that also started a valuable media franchise that includes seven rock musicals, many video games, four animated movies or feature films, as well as a couple of original video animation features. Among the most popular media from the Bleach series is their line of merchandise such as t-shirts, novels, and trading cards. Ichigo Kurosaki, a gifted teenager who has the ability to actually see spirits, comes up with a Soul Reaper named Rukia Kuchiki. Kuchiki is hunting for a Hollow or lost dangerous soul that must be defeated. Ichigo must help Rukia out and battle the evil Hollows while Rukia is left behind and stranded in the world of humans, sapping her of her strengths. Rukia may be punished for transferring her powers to another, namely to Ichigo Kurosaki. 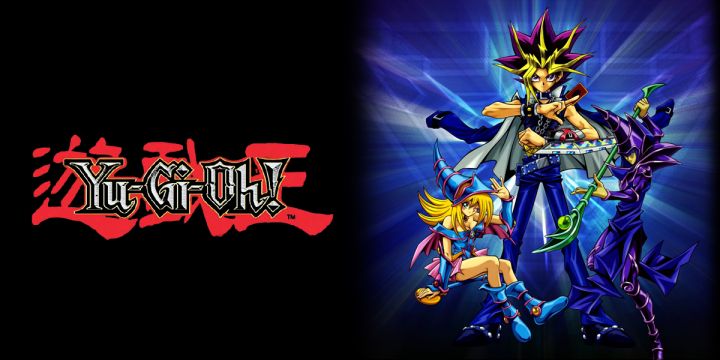 While Yugi Muto's character is the main one, there is a wide assortment of other interesting individuals, most of whom are friends to Yugi. He is in possession of the Millennium Puzzle. This puzzle allows Yugi's body to be the host of the "Spirit of the Puzzle" . Living with his mother and his grandfather, Solomon Muto while his father is away and on business, Yugi also has a group of his friends to chum around with. Among Yugi's assortment of friends are Tristan Taylor, Joey Wheeler, Ryo Bakura, and Tea Gardner. This anime entourage encourages each other whenever they play or fight. Joey and Yugi have dueled side by side while the first series saw Miho Nosaka and Mokuba Kaiba were close to Yugi and assisted him. He has plenty of friends to help him when in battle, and the lovely Tea has expressed her feelings for Yugi while he has loved her since they were young children. Good animation and strong family ties along with warm friendships make this anime series a good one for young viewers. 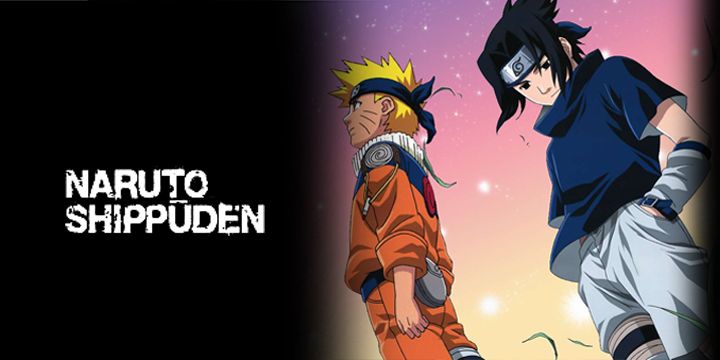 Naruto" not exactly a household name in your household? Have you checked with your teen-age sons? When you ask, be prepared to see the look that says, "Do we even live on the same planet? "˜Naruto.' Monumental Manga. Duh." "Naruto" has exceptionally strong teen-boy appeal, partly because it exemplifies all the best attributes of manga and anime, and partly because it shows Everyboy's struggle to earn respect from his family and community. Adolescent ninja Naruto Uzumaki has tried to prove himself worthy of the title "Holage," strongest and bravest of all ninjas, in more than fifty print volumes and 220 episodes on satellite network Animax. In Japan, "Naruto" in manga form has sold more than 100 million copies. In the United States, "Naruto" Volume Eleven won the 2006 "Quill Award." Critics and teen boys consistently praise "Naruto's" fine balance of comedy and battle scenes. If you have fallen woefully behind on your viewing of "Narutu: Shippuden," the definitive "Naruto" anthology, you will find comfort in the fact that Viz released it on DVD in September, 2009, and Disney XD continues regularly airing old episodes.