When you watch the episodes of Last Resort, you almost forget that it is just a TV show, because the series looks exactly like a high-budget Hollywood movie. The TV show was filmed in Hawaii by Sony Entertainment and revolves around the fictional submarine USS Colorado (an Ohio-class nuclear submarine equipped with mid and long range thermonuclear missiles). At one day Captain of USS Colorado, Marcus Chaplin receives an order to fire the deadly missiles at Pakistan. His first-time reaction was to execute the order, but meanwhile, when he checks the instruction and verifies order proceeding consequences he becomes stickling about the order he has got. As it is stated in the instructions, even such kind of disastrous order should come via standard protocol. However, in this case order have passed by a special mode used only in the case of one event: "USA is totally destroyed by an enemy". Chaplin feels some doubts about this order and ask the mysterious person from Washington (the one who issued the order) to repeat it in strict accordance with the instruction. In that moment he finds himself dismissed, and his vice Lieutenant Commander Sam Kendal was immediately put in charge. But Kendal asks the same confirmation of the order as instruction demands. As he does this, their vessel suffers hard friendly fire from USS Illinois stealthy standing nearby. Chaplin takes the command and heads USS Colorado to a distinct island at the midst of Indian Ocean. As submarine arrives to the island the crew manages to fix major consequences of the attack. But new issue arises on horizon: the squadron of US bombers is on the way to destroy the rebellious submarine, which has been declared America's most dangerous enemy. The situation has got more heat as Chaplin tries to stop bombers threatening "Washington" by readying missile launch targeted at the US East Coast. Such an entangled plot is perfectly accompanied by equally well combined ensemble cast. Marcus Chaplin is impersonated by House M.D. star Andre Braugher (you remember Dr. Darryl Nolan for sure), while XO Sam Kendal is played by a Lycan-Vampire Hybrid, Scott Speedman, from "Underworld". There is another mysterious character in Last Resort - Lieutenant Grace Shepard , a daughter of powerful US admiral and an undercover leader of the crew. She is portrayed by Harry's Law star Daisy Betts. 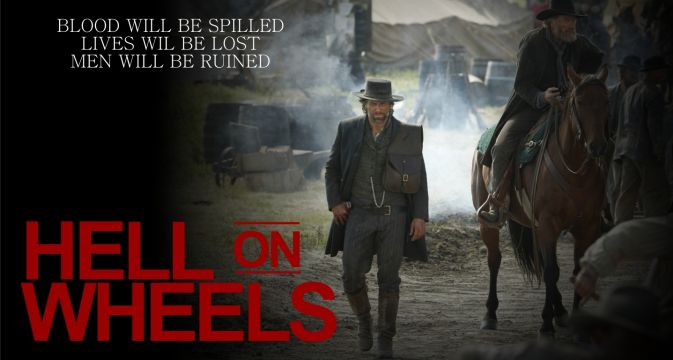 2021
War & Western
Using the Civil War and the wild American west as a backdrop, Hell on Wheels takes us on an incredible journey back to the 1860's when railroads were being dug, blasted, and scraped from one end of this country to the other. The land was opening up from east to west and the railroads could be credited for much of the civilization and modernization of North America in a time where native Americans chose to keep their land. There was plenty of bloodshed from sea to sea as the original owners of beautiful soil were forced to leave due to who had the bigger and more effective weapons. Follow along with former soldier in the Confederate Army Cullen Bohannon (played by Anson Mount) who seeks his wife's murderer. Rapper Common "Sense" is Elam Ferguson, a slave recently freed due to the Civil War, looking for a better life than he had before. Money seekers and brothers, Mickey and Sean McGinnes are both young and eager to establish wealth in the new west. Eddie Spears is Native American Joseph Black Moon, torn between holding on to his traditional life and the new world of opportunities. This series is a must see and should make interesting viewing for a long time due to excellent writing and quality acting.

2021
War & Western
While the original title for Combat Hospital was The Hot Zone, and its setting is 2006 in Afghanistan, this summer fill in program is somewhat of a tribute to our fighting men and women who are over there risking their lives on a day by day basis. The war zone hospital setting was originally made popular with the series MASH (with the setting in Korea) and later with China Beach (set in Viet Nam). Combat Hospital brings the war zone closer to home with plenty of drama and scenes of bloody wounded and even more reasons to hate our enemy "over there". Starring Deborah Kara Unger (Crash, The Game) as Major Grace Pedersen, an Australian Army psychiatrist, Michelle Borth (Silent Warnings, Wonderland) portrays Major (Rebecca) Gordon, a surgeon with the Canadian Forces, and as the trauma team leader, US Army Captain Bobby Trang (played by Terry Chen from The A Team, Psych, and Tower Prep). The team of medical professionals try their best to piece the wounded back together so they can return to the battle, or send them home to mend. It's a cooperative effort among allied countries including the United States, Canada, the United Kingdom, Germany, and Australia and most of the footage has been filmed on location whenever possible.